During my three and a half years at Nurture KC, I have preached the importance of politics and policy as a key driver of maternal and infant health, necessitating our advocacy. Today, with the overturning of Roe v. Wade, this reality is driven home in the most painful of ways, with women losing bodily autonomy and reproductive freedom in an instant after 50 years of settled law.

As an organization that aids pregnant women in navigating the system and circumstances to ensure healthy births, you might question our involvement in the right to choose abortion. It is precisely because of what we see daily – and the connection between reproductive freedom and maternal and infant health – that drives our belief that a great injustice has been done to women and families. The mothers we serve live in the ZIP codes of Kansas City, MO and Kansas City, KS with the highest rates of infant mortality in the metro. They are often the poorest of the poor, facing barriers in daily living that most of us take for granted. While this is a universal issue, the brunt of this decision will be borne by those least-advantaged, particularly Black families. Shannon Williams, Healthy Start Program Director, was interviewed by KSHB-41 News on this topic, which can be viewed here.

Kansas will be the first state to vote on the question of maintaining reproductive freedom and protecting women’s health. On August 2, there is a ballot initiative that would place the authority to restrict/ban abortion with the legislature, reversing a Kansas Supreme Court decision that reinforced the constitutional right to privacy and abortion two years ago. A “no” vote on August 2 protects a woman’s right to choose while a “yes” vote allows what is anticipated to be a ban through legislative action next session. While many of us resent the fact that women’s health is a political issue, please vote! A woman’s life may depend on it.

Missouri already ranks a dismal 44th nationally in maternal mortality, with a rate for Black mothers three times that of White mothers. Missouri is also one of the states that has a “trigger” law that essentially banned abortion as soon as the Supreme Court decision was released. This is against the backdrop of a legislative session in which lawmakers defeated an effort to extend postpartum Medicaid coverage to one year, a policy that would truly value the lives of Missouri mothers and their children.

Thank you to everyone who attended our Annual Meeting — “Families First: Expanding our Approach to Wellness.” We also appreciate all of the meaningful content shared by our presenters from The University of Kansas Health System, Children’s Mercy, Providence Medical Center, Medical Students for Choice, Kids Win Missouri, United Methodist Health Ministry Fund, Heartland Center for Jobs and Freedom, Missouri Department of Health and Senior Services, Kansas Department of Health and Environment, City of Kansas City, Mo. Government and Nurture KC.

For more details, members can check out our members-only web page at www.nurturekc.org/members. If you’re a member and have forgotten the password, please email Erica Wilson at ewilson@nurturekc.org. 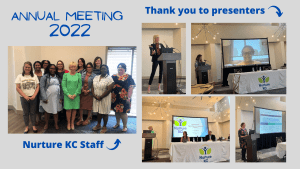 Our View: Roe vs. Wade Overturned

Why should hospitals be certified in safe sleep for babies?

Yesterday, at Nurture KC’s Annual Event, we unveiled our “Nurturing Safe Sleep: Hospital Certification Program.” Why? In Kansas City, unsafe sleep accounts for 16% of all infant deaths, and 24% of Black infant deaths. These deaths are preventable!

How can our community come together to help Kansas City families who need it most? Nurture KC’s Annual Event is a tangible step to do just that. The event, called “Families First: Expanding our Approach to Wellness,” will take place June 22 from 8:30 a.m. to noon at the Loretto Auditorium, located at 1111 West 39th St. in KC, MO.

The event kicks off with keynote speaker, Pamela Merritt, Executive Director of Medical Students for Choice. Merritt’s career reflects her dedication to expanding access to reproductive healthcare. Click “read more” to see what other topics will be covered and to learn more about Wednesday’s event, which is open to anyone!

A special shout-out to the dads in our Healthy Start program making a difference in their children’s lives. In honor of the holiday, we asked for pics of our dads with their kids, then chose 3 winners at random to receive gas cards. 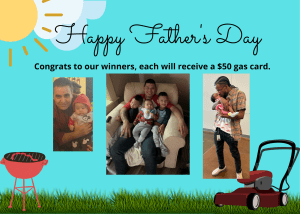 Nurture KC is proud to be a Health Expo vendor at today’s Juneteenth KC Heritage Festival. Learn more at www.juneteenth-kc.com/history. 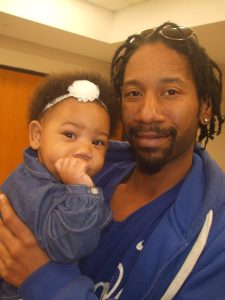 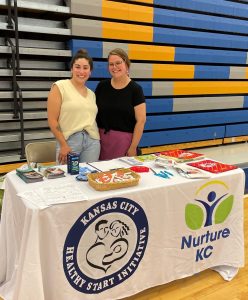 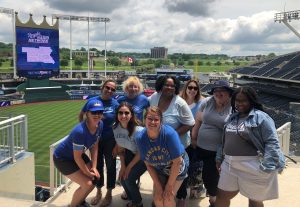