In a medically-induced coma, Andy fights for his life.

‘I almost died from Meningitis’

Within 24 hours, Andy Marso went from being a healthy 22-year-old about to graduate college, to fighting for his life in intensive care as his organs failed. Meningitis B was a swift villain stealing Andy’s life as he knew it. It was only by luck Andy had mentioned to his friend, Clay, that he wasn’t feeling well the night before and turned in early with flu-like symptoms. Clay checked on him the next morning, knew something was terribly wrong and decided to take action. What followed was a perfect chain reaction that, ultimately, saved Andy’s life. Although it wasn’t without horrific pain, suffering and loss. Here, Andy shares his story in his own words…

When did you know your illness was serious?

I had never felt more sick in my life, but I didn’t think I was in danger. It all happened so incredibly fast. When Clay saw my arms and legs had turned purple and realized I couldn’t stand up on my own, he made a split-second decision to take me to the student health center at KU. The doctor there called an ambulance to take me to Lawrence Memorial Hospital where I first heard the word ‘Meningitis.’

Fluid from my spinal tap was cloudy, instead of clear, which immediately told doctors I was in serious trouble. They called my parents in Minnesota and told them I may not make it, as I was airlifted to KU Medical Center in Kansas City. On the flight, I started gasping for air. I couldn’t breathe and it was scary as hell. I knew I was going downhill fast. When we arrived, I was intubated and put into a medically-induced coma for 3 weeks as I received heavy-duty antibiotics to fight the infection. I don’t remember much from that time. Looking back, I’m fortunate for this chain of events that saved my life. Clay and numerous medical professionals acted fast and made the right calls every step of the way. If any of these ‘links’ would have broken down, I would not be here today. For instance, if Clay hadn’t checked on me, I would have died in my bed that morning. 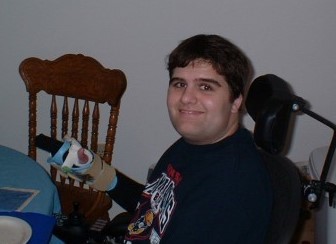 Andy after being released from the hospital.

What happened when you woke up from the coma?

I learned the peculiar, purple ‘rash’ on my limbs was actually bruising from blood poisoning. The bacterial infection had released toxins which were burning through my blood vessels. Blood could not get to my extremities. Three weeks later, when I woke up, my limbs were in bad shape – essentially rotting away while still being attached to my body. I’ll never forget when my bandages were removed and I saw what was left of my hands and feet for the first time. Awful doesn’t begin to describe it. This tissue damage was equal to third-degree burns over 30 percent of my body. The doctors gave me a decision to make – either amputate below my elbows and knees, or go through a process called debridement in the burn unit to try and salvage as much of my limbs as possible. I chose the latter instead of amputation. Although nothing could prepare me for the experience.

Debridement essentially slices off dead tissue until blood is drawn, which signals healthy, living tissue that can be saved. It was excruciatingly painful even on pain meds, and I had nightmares about it for years. I also had skin grafts for larger areas like my forearms and lower legs. The process saved my arms and legs, but I still lost the front half of both feet and all of my fingers except my right thumb. It took me a month to be able to get from my bed to wheelchair with only one person’s help. That was my criteria to be released from the hospital. Then, my parents and I got an apartment by the hospital so I could attend physical and occupational therapy for almost a year. I had to re-learn how to eat, walk, shower … everyday activities I needed to function. It was a long, difficult road to recovery. But I am grateful for this second chance at life and I’m using it for good. 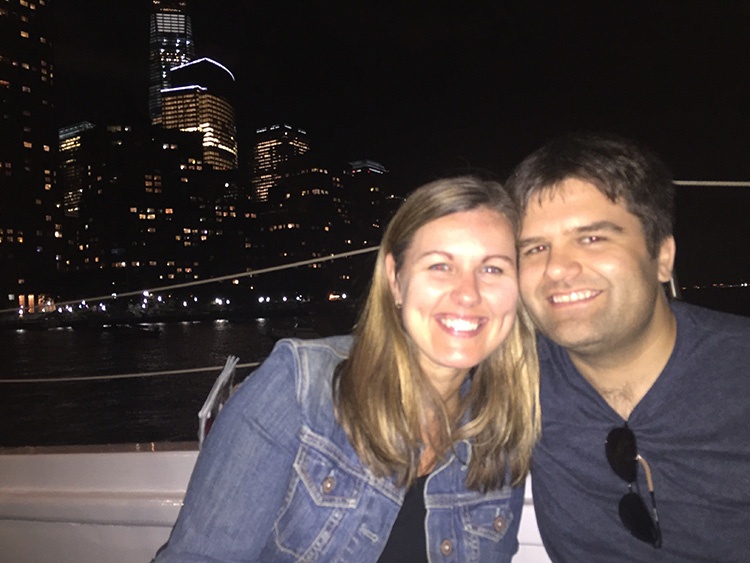 Andy with his wife, Rachael, in a recent photo.

Why does immunization matter to you?

Meningitis is preventable. All it takes is a vaccine as a teenager. As a parent, you can’t protect your children as they go off to college or into the world. But, you can prevent them from getting Meningitis. It’s one worry you can take off your plate and control. The vaccine is required at most colleges now, and became required at KU after my experience in 2004. Luckily, no one else contracted it when I did. I’m thankful the campus did extensive contact tracing with everyone I lived with, attended classes with, and worked with at the newspaper. Clay and many others had antibiotics as a preventative measure because the disease is highly contagious. I’ll never know how I was exposed and I’ve come to peace with that. My energy now goes into my work as a writer and testifying for vaccine-related bills in Kansas, Missouri and Nebraska so far. It’s important for people to understand the dire consequences of not vaccinating.

Check out Andy’s autobiography, “Worth the Pain: How Meningitis Nearly Killed Me – then Changed My Life for the Better.”