‘My infant got Measles’

Alex with a rash from the Measles.

Jenny Dioszeghy is a mom and doctor. When her son, Alex, was 9 months old he contracted a mysterious illness. He had a head-to-toe rash, puffy eyes and a fever for a week. His initial diagnosis was atypical Kawasaki disease which causes inflammation in young children from an unknown cause. Alex was treated at the hospital with Intravenous Immunoglobulin, or IVIg, a treatment giving his tiny body antibodies (which he could not make on his own) to fight the virus in his system. Within a few days, Alex recovered. Life resumed.

Yet, Jenny wondered in the back of her mind if Alex had Measles even though it’s virtually eradicated. A blood test later confirmed that Alex did, indeed, have antibodies in his blood for Measles. Here, Jenny shares her family’s experience in her own words…

What did you learn through your experience?

So much! Unfortunately, Alex got Measles before he was old enough to receive his MMR (Measles, Mumps and Rubella) vaccination. Turns out, at least one other infant in our daycare also had Measles which was upsetting. Hospitals hadn’t seen the disease in many decades. This was in 2011 and, in hindsight, happened at the beginning of a Measles outbreak due to parents not vaccinating their kids. We’re all at risk when people choose not to vaccinate. Thankfully, Alex recovered and is a healthy kid now. But he is still at risk for a rare complication called Subacute Sclerosing Panencephalitis (SSPE).

It’s a fatal brain disorder caused by reactivation of the Measles that shows up years later – usually in teenagers. Some symptoms are irritability, outbursts and loss of concentration which also happen to be typical teenage behaviors. Although rare, it’s still scary because those most at risk for this condition are males who contracted Measles younger than age 2 … just like Alex. It’s frustrating because we have the vaccine, so no one ever has to be put at risk. In fact, Measles and other diseases have been reduced up to 99.9 percent since the corresponding vaccines were introduced. Our family just happened to be unlucky. My hope is when people hear personal stories, like ours, it creates conversations that are honest and fact-based. 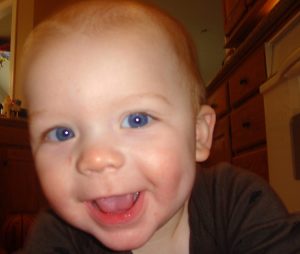 Alex a week before he got Measles.

Why does immunization matter to you?

I think vaccines are the most powerful medical advancement in human history. Vaccines prevent up to 3 million deaths worldwide each year. It’s a powerful concept to prevent illness rather than to react and treat symptoms. As a doctor, I always want to use prevention as the first course of treatment … whether it’s allergies, asthma or diseases that have a vaccine. Immunizations are safe, effective and vital to public health. Immunizations are proven to NOT cause autism and are NOT too much for an infant’s immune system to handle. As a mom, I want to keep my children healthy and protected so we vaccinate. It builds our bodies natural immunity to a disease before we get sick. It’s the right thing to do!