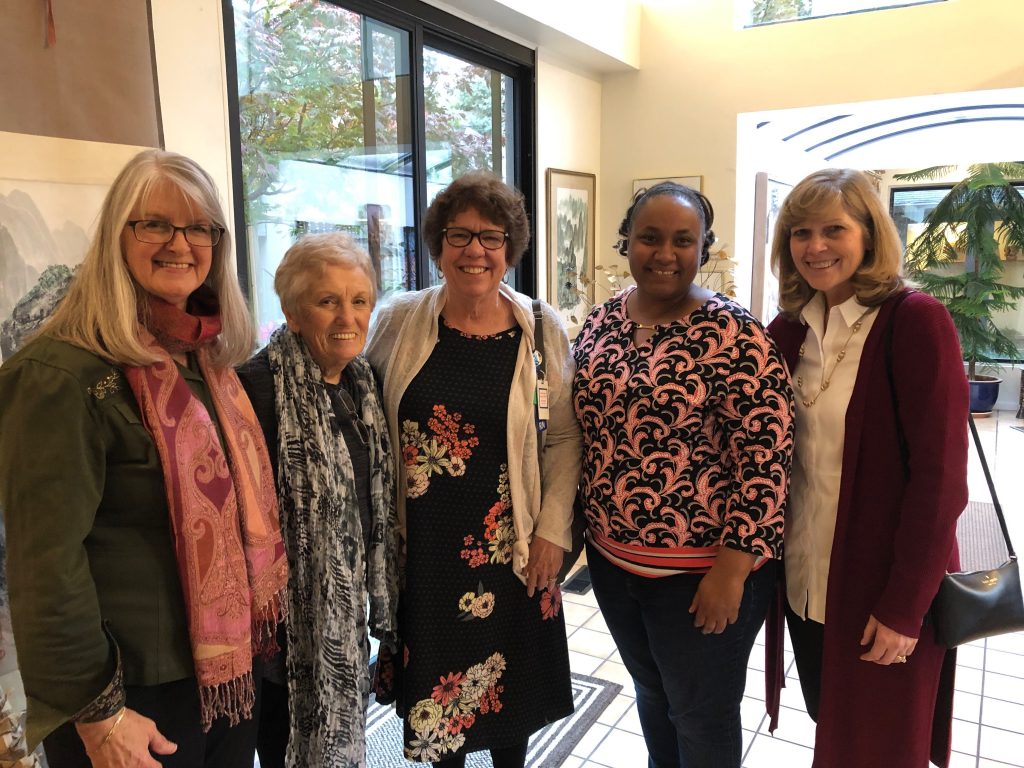 I’m so happy to be here today to help celebrate Anne’s retirement and her over 20 years of dedication and commitment to Maternal and Child Health Coalition of Greater Kansas City.  I have worked with Anne longer than anyone else at MCHC so I wanted to share a little bit about her history with the Coalition.

1999—Anne was hired to be the first administrative assistant for the Coalition.  At that time we were employees of UMKC under the Institute for Human Development and our offices were at the Health Sciences Building on Holmes and 23rd Street. Soon, Anne completed her bachelor’s degree in Liberal Arts at UMKC.

2000—The Coalition became a 501(c)(3) nonprofit organization and shortly after, the office relocated to the Rivergate Building at 600 Broadway and Anne was promoted to office manager.  We shared office space with the Center for Management Assistance and with the Mid America Regional Council (MARC).  In a few years the Coalition expanded programs, especially Healthy Start and Mid America Immunization and we outgrew our space at the Rivergate Building.  We moved to larger space in the Medical Building on the campus of Research Medical Center.  As Office Manager Anne played a big part in those moves.

Over the years Anne developed and nurtured relationships with many media contacts, including newspapers, radio and TV.  Mother & Child Health Coalition and its programs were becoming more visible within the community.

With the board’s strategic plan in 2010 to further enhance development and public awareness, it was clear that significant time needed to be devoted to implementing a marketing and communications plan and the position of Communications Coordinator was created and Anne was promoted to that position.  She was already functioning as Publication Specialist and Newsletter Editor.

Anne took the lead or assisted in most all the public awareness and communications initiatives over the years, including:

Anne also provided support with other staff for many programs over the years including:

As many of you may know, Anne embraced the Safe Haven for Newborns initiative and a community awareness campaign focused on the promotion “No One Ever Has to Abandon a Newborn.”

Anne was always willing to pitch in and help with any tasks.  When people talk about a team player, Anne is a true example.  When we held weekend events for Healthy Start, Immunizations and Safety, Anne would be one of the first to volunteer.  And then there were the many Health and Safety fairs.

Anne continually helped all of us with editing documents, often with little lead time.  She would drop what she was working on if we had grant deadlines and particularly if we had to limit the number of pages submitted—she has a special skill with editing and making wording more succinct.  She also had much better formatting skills and could shrink the number of pages by adjusting margins and line spacing.

As many of you know, Anne has a beautiful singing voice and has been in concerts not just in Kansas City, but all over the world. She would make our holiday parties a little more festive with her singing. She created a beautiful, multi-lingual Lullaby CD and she has donated several for special events.

I hope you realize, Anne what an impact you have made on the mission and work of the Mother & Child Health Coalition and how important you have been for so many mothers, children and families as well as the other staff. I am sure you will continue to use your talents and knowledge to help others.

We all wish you much happiness and joy, Anne as you start this new phase of your journey.

A few photos from the event: